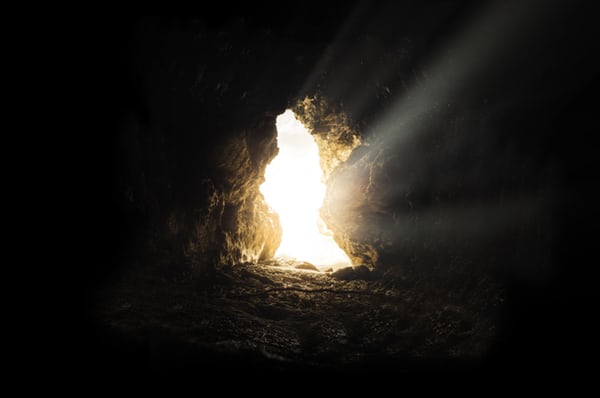 The smell of bread lingered in the air as it cooled on the old wooden table in the middle of the stone home.  Rolled up bed mats stored along the north wall and the fireplace housed embers now left unattended.  The dirt floor was swept and ready for the family to gather in the evening, but no one was home.

A neighbor told Hannah about the chaos that had broken out in the city, so Hannah left her home to see with her own eyes if what Leah told her was true.

Hannah bit at her bottom lip as she pulled her veil closer.  The streets were becoming more crowded with curious people as she made her way to the center of the city where the spectacle was being held.

As she walked hastily, she could hear others talking about a notorious prisoner being released by the governor.  Each year at the Feast the governor’s custom is to let the people choose a prisoner to be released.  But Pilate did something different this year that caused Hannah to hasten her pace.

Breathless she approached the main square pushing her way through the thick crowd that squeezed in on her, but she remained persistent till she was at the front of the mob looking at the horrendous scene before her.

Hannah paled as she eyed a bloodied and beaten man.  She almost didn’t recognize him.  A Crown of thorns sat on top of his head with the long thorns embedded into the skin leaving streaks of dried blood that trailed down his face.  Stripes of ripped open wounds were scattered all over his back.

Hannah covered her mouth as tears started to stream down her cheeks.  How could the people have chosen this man; he was no criminal?  Leah had told her that Pilot let the people choose between a notorious prisoner and a teacher to be released.  The mass had chosen Barabbas and asked to have the teacher crucified.  It made no sense to her why this would be happening.

Then she watched in disbelief as the man cry out and stumble as he struggled under the weight of a large beam being placed on his back side.

Hannah couldn’t contain herself any longer and stepped away from the crowd wanting to give this man some comfort, but she felt her arm being wrenched backwards.

“Get back!”  Yelled the roman soldier.

“No!  Jesus!”  Hannah pleaded as she fell to her knees.

Hearing her the man looked at Hannah.  What she saw surprised her.  She expected to see fear and anger on his face but instead, she saw love and compassion in his eyes.  A look she will never forget.

Then a soldier pushed the man forcing him to walk the road that Hannah knew would lead to the hill called Golgotha.  Jesus was going to be crucified.

It’s Easter time and I felt compelled to write a story of how it would be like to be a woman in Jerusalem discovering an injustice to someone she knew who didn’t deserve it and having no control in stopping it.

I have seen several movies about the crucifixion and resurrection.  All of them provoke tears from me.  I’ll never come close to fully understanding what that man went through.  The pain must have been unbearable, something that I will probably never experience.  Despite that he still walked up to the hill known as The Place of the Skull.  What an appropriate name for a place where crucifixion was done.

As you know, Jesus died.  But thank goodness there is more to this story.  Three days in the grave and then Jesus arose from the dead.  I don’t know how it happened, but I know this to be true.

Today is Easter, the day we celebrate Jesus rising from the dead.

Do you ever wonder what it must have been like for Mary Magdalene and the other Mary to walk to the tomb and find that the massive stone had been rolled away from the opening?  Discovering an empty grave and wondering who would steal a dead body?  Imagine the disbelief the two women must have felt when the angel told them that Jesus was not there but that He had risen.

Easter is not just a day of kids, easter eggs, church, or get together with family and friends.  It’s a day of celebration.  Jesus is alive!

May you have a blessed Easter with your friends and family, and may we never forget why we celebrate Easter.

“The great gift of Easter is hope.”- Basil Hume