The Sock Episode and Faith 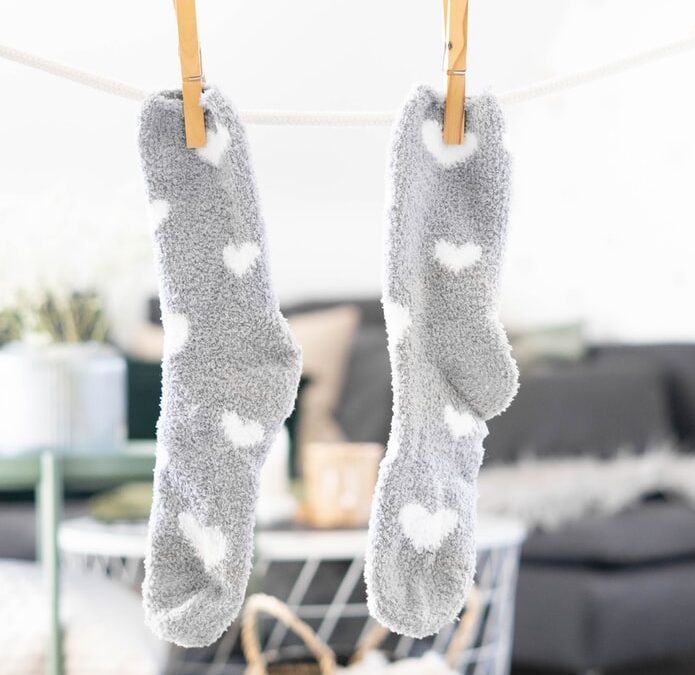 Working in an assisted living facility has its moments of funny and weird situations.  Some of the residents with worsening dementia can come up with some odd antics or off the wall comments.  One such afternoon I was trying to finish some assessments when I received a call from one of the caregivers, Cindy.

“Gwen, I don’t know what to do.  Maxine won’t let me put her socks on until I ask you.”

I welcomed the distraction and jumped into nurse mode.  “What’s going on?  Is she in pain or does she have a sore?”

A sigh came across the phone line.  “No.  Maxine says she can’t remember which foot the sock goes on first.”

This was not the answer I expected.  A giggle inside of me start to rise but I maintained my professionalism.  “Did Maxine say why?”

I could sense Cindy’s frustration.  She was probably trying to complete her task with Maxine so she could move on to her next resident.  “Maxine says it has to do with bad luck and she is sure that the nurse will know.”

What in the world would I know about which foot you put your sock on first, but for Maxine it had stopped her from going forward in her day until this mystery was solved.

Rolling my eyes, I silently thought, wow my patient thinks I know everything including superstitious issues.

The only knowledge I had of such stuff was from my mother-n-law who was superstitious.  I remember her doing stuff like, throwing spilled salt over her left shoulder.  Another time she had a set of steak knives in a package on the counter and pushed it towards me stating, “It’s bad luck to give a knife as a gift but these are here if anyone needs them.”  Then she pushed the knives closer to me and walked away.

Nursing school didn’t prepare me for this, so I was going to have to wing it.  With Maxine’s dementia I figured I was safe in just choosing a side.  I had no blessed idea of which foot it was, so I looked at my hands and silently said, eeny, meeny, miny, moe catch a pig by its toe and you are it.  The right hand ended up being it.

Solemnly I said, “Tell Maxine that it’s very important that she puts the sock on her right foot first then the left.”

I was amazed when Cindy reported later and said that Maxine was fine after the sock episode and never questioned the validity of my answer.   After that I was curious.  Is there such a thing as having to put your sock on one foot before the other?  So, I googled it and by golly there is.  Evidently you are supposed to put your right sock and shoe on first so you will have good luck through the day.  I lucked out on that one!

Maxine had confidence in me even though I was guessing.  Thankfully, my life doesn’t hinge on superstitious stuff but on a God, who is very real.  Like Maxine, do I have unquestioning faith when it comes to trusting God?

The word faith is easy to say.  “Have faith.”  But when it comes to the action part of the word it’s a totally different story.  Why do I think that I need to see it to believe it?

“Faithless is he that says farewell when the road darkens.”― J.R.R. Tolkien

Maybe it’s human nature to trust your senses to tell you if it’s safe or not.  The unforeseen becomes a scary place and it’s only natural to avoid or protect yourself from unknown situations.

“Never be afraid to trust an unknown future to a known God.”― Corrie ten Boom

But isn’t that kind of boring?  God didn’t give us a spirit of insipidness.  Nope.  He created us with a yearning for adventure and excitement.  In order to experience this sometimes we need to take a step out of our comfort zone into the unfamiliar.  Scary?  Yes!  But it can also be exhilarating.

“None of us knows what might happen even the next minute, yet still we go forward. Because we trust. Because we have Faith.”― Paulo Coelho

You may think you know God well enough, but you will discover another side of Him when you go on an adventure with Him. Growth in us requires going into uncharted territories of our life, so why not do it with the one who created you.  Allow Him to show you something new.

I’ll tell you what, God never disappoints.  If you’re going through a rough patch of life and feel like you’re trudging through unfamiliar places, then embrace it.  Keep your Bible open and be in prayer.  Take this opportunity to grow and be stronger.  Yes, you may feel like you are jumping off a cliff, but God is there as you take flight testing out your wings.

Luke 1:37 – For nothing will be impossible with God.