The Man Who Lived in the Field 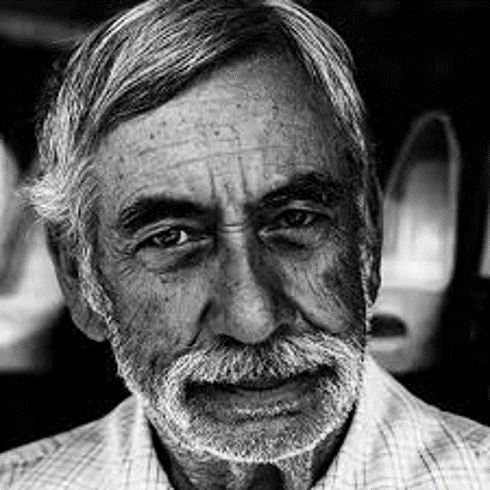 “When I was young, no one ever told me that I would be living in a van on a field.  Sometimes it gets downright cold at night. I have this old snowmobile bib that I put on and then layer up. But, it’s not so bad as long as I keep wiggling my toes to keep the circulation down in my feet.”

I looked at Stan, a homeless man, who had been living in our field behind our home. “Did you want to come up to the house for a while and warm up?”

Stan nodded his head side to side, his way of saying no he wasn’t ready yet. So, I sat down on his spare folding chair he had placed next to his small camp fire.

The cast iron tea kettle was strategically place on the out skirt of the fire to keep the water hot. Stan picked it up with a towel and poured hot water into a spare cup. After placing the kettle back in its spot, Stan then opened his instant Folgers jar and shook some granules into the hot cup of water.

I have never liked instant Folgers coffee, but I wasn’t going to decline Stans offer for he was sharing one of his most prize possession.  Instant coffee. The stuff was expensive so he used it sparingly. Sharing it with me was a big deal.

“I’ve missed you, Lizzy.  Ever since you went to school it’s been down right lonely. How is school?” Stan handed me the cup of coffee after he stirred in the granules and waited for my answer.

I had just come home from college for Christmas break. One of my assignments while on break was to interview someone who was homeless. I have a hard time calling Stan homeless but I guess that’s what he is.

Stan moved in on our field when I was twelve years old. Mom had just bought the house with a little land behind the house consisting of trees here and there and a creek going through the lower part of the field.

“School is good. I’ll be glad when it’s done.  I just want to start reporting on stories.” I took a sip of the coffee. It almost made my face pucker but I managed to maintain a straight face. The stuff was bitter, I think he put an extra smidgen of coffee granules in my cup.

“Tell me about this assignment you need to do.”

For a homeless man, Stan had always been true and steady. I remember when I came home from school one day. I grabbed a snack and a drink out of the fridge and headed out to my favorite spot. Mom worked full time as a nurse so I was what people called a latched key kid.

I climbed the oak tree up to my spot where three branches came together and made a nice platform for me to sit and rest. While eating, I scanned the area with my binoculars looking for something to report on. Something grabbed my attention out on the field. In the midst of a small grove of willow trees was something white.

I couldn’t make out what it was. Once I was done with my snack I climbed back down the tree and trekked out in the field to solve the mystery.

As I came upon the willow trees, I could see a man digging a small hole. As to what he was doing I didn’t have a clue but for some reason he had sensed that I was present. He turned and looked straight at me and said. “If you’re going to be present then you might as well come into my camp.”

Come to find out my mom had invited him to stay in the field so he had a place to stay. At that time, I don’t think she had imagined Stan staying as long as he did but that’s what happened.

“The assignment is to interview someone who is homeless.”

Stan held his coffee cup between his hands.  “So, you thought of me?”

“It’s not that I thought of you homeless, I just thought you had a story to tell. How did you get to this point in your life and who is Stan?” I took another sip of the bitter coffee.

Stan placed his coffee cup between his legs then reached for a pack of cigarettes out of his side jacket pocket and slowly took out a cigarette. “You want to know about this old man’s life. I did have a life before everything went south.”

I watched Stan bring the cigarette up to his mouth then took a lighter in his hand and struck up a flame that touched the end of the cigarette. He drew in a deep breath then put the lighter and pack of cigarettes back in his pocket.

After taking a couple of long puffs, Stan pulled out the cigarette with two fingers. “I was born in Southern Oregon. My mom found out that she was pregnant so my dad married her. There are two other siblings after me.”

Stan seemed to be in another world as he stared off in space with his right hand suspended in air holding onto the lit cigarette.

“My parents didn’t deserve us kids. They fought all the time, slamming cupboards and doors, yelling and physically fighting each other. I was never one for confrontation. When my siblings and I were older, we would go spend Christmas at the beach just the three of us so we didn’t have to hear one parent say, ‘why you spending time with her or him why not with me’. My parents would fight over us to spend time with them. It felt like it was a competition between the two of them.”

Stan took another draw from his cigarette and I followed suit with another sip of the bitter coffee. “My dad left when I was a teenager.  I think he got tired of my mothers yelling and screaming. He then remarried. I never cared for his wife. Of course, I never cared for my parents either.”

“There were times in my life that I wished I had a normal family, but that wasn’t in the cards for me. I married once. She had a daughter but that marriage didn’t last.”

This was amazing that Stan was opening up like this. He never would talk about his past when I was a kid. Stan continued on. “I had a job with a company where I did sales and traveled a lot. I was pretty good at it and made lots of money. I even had fancy cars.”

He paused and took another puff of his half-lit cigarette and slowly exhaled out the smoke. “I got to a point in my life that I just didn’t want to deal with people anymore. So I quit my job and started flipping houses. I was pretty good at it too. Used up my retirement fund to do it. But the 2008 recession hit and I didn’t care to deal with anything in life so I just left everything and took off in my truck to live out on the road.”

I took a good look at Stan. Gray haired with stubbles on his face. He was missing a couple of teeth. I had asked him once about his teeth and he merely responded that he had pulled them out himself because they were getting bad. When I asked why he didn’t see a dentist he simply said, ‘don’t trust them’.

He wasn’t a big man but he was always good with his hands. Mom would pay him to do odd jobs around the house which gave him some money to buy supplies.

“What changed? Why this shift from one life to another?” My coffee was starting to cool down but I took a couple more sips. I wasn’t going to waste Stans coffee.

Stan took one more puff of his cigarette then dropped it to the ground next to his foot where then he snuffed out the cigarette’s life with his shoe. “After the 2008 recession hit, there wasn’t any jobs especially in construction. I wondered around across Washington, Oregon and California. Met lots of people in the same predicament. I found this life to be much simpler and easier to manage. Being around people or family wasn’t something I cared to endure anymore.”

“Do you ever miss your family?”

Stan looked in my direction. “I used to think it would be nice to have a normal family but I gave up on that. It’s too distressing to think about it. Besides, why would I need anyone else, I have you and your mom.”

We talked a little more. Stan revealed that he had tried several times to get another job but dealing with people and all the technology was too over whelming. I never thought about that aspect. How many people wrestle with this problem and choose to live a simpler life.

I finished the coffee and left Stan to enjoy his quietness.

It got cold, seventeen degrees that night. My mom and I went down to Stans van and persuaded him to come up to the house. After Stan had taken a shower, which is moms only house rule for him, we got him settled on the couch.

Stan slept on the couch for a couple of nights then it warmed up and he went back down to his van.

Christmas came and we had dinner including Stan. Stan doesn’t usually like holidays but I think he had been missing me and wanted to spend time with me.

January the first came and I had finished my assignment. I submitted it via e-mail then packed my car up and was ready to head back to college.

I went down to see Stan that morning before I left. We had coffee together and talked about little stuff. He gave me his shark bottle opener.  I was always fascinated with it when he brought it out to open his beer bottle. But today, I was to have it. He said, “remember me with this.”

My paper on Stan was given an A plus. It was probably the best paper I had ever written.

Then in February my mom called to let me know that Stan had passed away. She had found him sick with a fever and a cough. Mom said she pled with him to go to the hospital but all he said was that he didn’t trust them quacky doctors and the whisky would kill the germs. The next day she went down to bring him some breakfast and found him in his bed. He had passed away.

I’ll never understand why Stan chose to live the way he did but that was Stan.

It’s been ten years now since Stan passed away. I still carry the shark bottle opener on my key ring to remind me not only of Stan but of how precious life is. Every human being deserves respect and kindness regardless of how we choose to live it.