God, Why Did You Let This Happen? 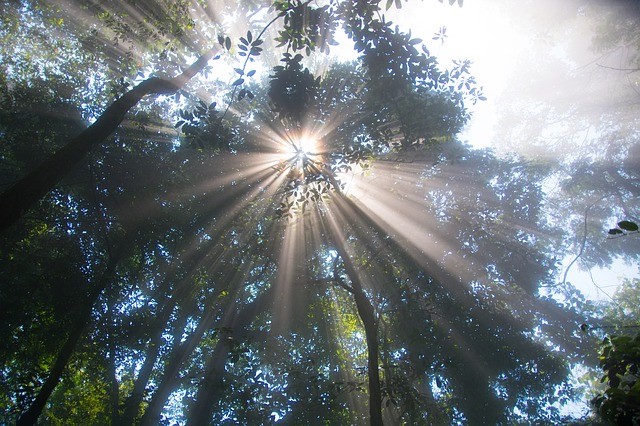 church ornately stood on the corner of Main Street and Fifth Avenue amid the green grass and a few scattered trees.   ​

Its regal white steeple reached to the blue sky coveting its large bell that rang on days of special occasions such as weddings, funerals and holidays. The church had been built in the late 1800’s, dedicated to serve its community and spread the word of God.

Nate sat on the bench next to the historical info plaque eyeing the building. He had been on the road since four this morning and was driving through the small town when he spotted the beautiful church. Taking a break from his road trip and getting something to eat seemed like a good idea. After stopping at the local burger place, he drove back to this spot for some quiet time to reflect.

How many people have come and gone in this church, Nate wondered? He wasn’t a believing man but was familiar with the religion. It had been a long time since he had been in a church. His job, back in the city, kept him busy. At times he felt like his life was on a fast track leaving little time to stop and enjoy life.

While looking at the building, he thought about what was waiting for him when he reached his destination. Sadness was heavy on his shoulders and today God seemed to be at the forefront of his brain.

Nate was deep in thought and did not realize that someone had sat down on the bench next to him until the man spoke. “I always enjoy looking at this majestic structure. If only the walls could speak, imagine the stories it could tell.”

Nate about dropped the hamburger he had just unwrapped and was about to take a bite out of it. As he turned his head toward the sound, he met the old man’s gaze with fading blue eyes. The gentleman had short white hair and sat with one leg crossed over the other with one hand resting on a cane that he had propped up next to the bench. Dressed in a white shirt and brown slacks, the man appeared to be someone who was out for a walk enjoying the nice weather.

“Where are my manners, my name is Joe. I saw you sitting here and thought I would enjoy the site with you. I hope you don’t mind.”

Nate smiled. “No, I don’t mind. I was just sitting here and admiring the building myself.”

Both men sat enjoying the warm weather. Nate took another bite out of his hamburger when Joe spoke again.

“Are you passing through town?”

Nate nodded his head as he swallowed the bite he had just got done chewing. “Yeah, I’m heading down to Louisiana for a funeral.”

Joe turned towards Nate. “I’m sorry to hear that. Someone close to you?”

Hearing those words caused another surge of grief to course through him. How is it that today he was going to see another family member be laid in the grown, never to see again. Where was God in all of this. “Yeah, my Grandma Jane passed away four days ago. She contracted the Coronavirus and got sick. The doctors said that she was struggling with her breathing and was brought to the hospital. The next day she died. I didn’t even have a chance to get down there to see her before she passed away.”

Nate’s anger spewed over with the last sentence. How could God be so cruel to such a sweet loving woman.

Joe’s voice broke into his thoughts. “She must have been pretty special to you.”

More then special, thought Nate. “My parents died in a car crash when I was twelve. Grandma Jane took me in and raised me. She was the only family I had left. Now she’s gone too.”

The old man sat quietly next to Nate allowing him to continue with his dark thoughts. The church reminded him of the one his grandma used to take him to every Sunday. She never wavered, even in his later teen years when he became rebellious, he was still in church sitting in a pew next to her. Grandma Jane had said that it was up to him if he participated with singing the old hymns or listening to the sermons. But it was required that he be present in church with her. She always said that hearing God’s words would find its way deep into his heart regardless if he listened or not.

Nate smiled and realized he had made an audible noise. The man next to him turned towards him again waiting for his explanation of why he chuckled out loud. “I was thinking about the many times my grandma would drag me to church. As I got older, I was more reluctant, but she insisted I attend church as long as I was under her roof. I never had time for God. It just wasn’t my thing. I went along with it because she was the only family I had left. At least as a kid I had enough smarts to not burn my bridge with my only living relative.”

Joe nodded his head. “Sounds like your grandma was a strong woman.”

“Oh, that she was.” Nate shifted in the bench to face Joe better. “Many times, I found her on her knees in the living room praying when I came home late from being out all night. I was angry a lot and did a lot of things that I would have never repeated to my grandma.”

Joe looked up to the sky eyeing nothing in particular. “How’s that anger now?”

After looking at the sky to see what Joe was looking at, Nate let out a deep sigh. “I would like to say that I grew up and matured. I don’t think I’m angry anymore. I’ve come to terms with my parent’s death but today I can’t help wondering why people say that God is loving and good. If he is really the almighty god, then why does he let all this bad stuff happen to us?”

Both men let the silence stretch between them as the birds nearby where chirping messages back and forth.

While Nate finished his lunch, Joe started to speak. “That is a question that man has been asking for a long time. I too have wrestled with this question. No one knows why God allows bad things to happen.”

Nate crumpled up the wrapper and put it back in the sack. Joe continued. “It says in the bible that at the ninth hour while on the cross, Jesus cried out with a loud voice, Eloi Eloi lama sabachthani? which means, My God, my God, why hast thou forsaken me? Even God’s son asked why.”

Joe rubbed his chin with his hand. “What I do know is that this is a broken world riddled with evil. There are so many unanswered questions during these strange times that we’re experiencing today. But God is in the middle of it all on so many levels that we are not aware of. When evil is meant for evil, God turns it for good. While we are in the depth of the valley, a lot of times we don’t see the great scheme in God’s plan. God has no joy in seeing us suffer, especially going through the pain of losing someone dear and close.”

Nate crossed his arms pondering on the words the old man had just spoken. “My grandma always told me that the bible is a road map on how to live our lives. If it has the instructions, then why do we still have to experience these bad things? You said it yourself, God doesn’t intend for us to suffer.”

Joe stood up and turned around. “Those are good questions, Nate. As I get older, I find that going through hard times are no easier than when I was younger. But each time I experience a difficult circumstance, I notice that I become stronger as a person. They say that you don’t know how to get up if you haven’t fallen. In other words, if we don’t face trials or difficult circumstances in our lives then how do we grow and mature?”

The man readjusted his pants at his waist and smiled. “Keep searching and asking God why. I bet your grandma has a bible that she has kept close to her.”

Nate nodded. “I remember her always having that book with her. It’s probably sitting on her nightstand next to her bed.”

With a serious look, Joe spoke with passion, “When you get to your grandma’s house, find that bible of hers and read it. Remember Nate, God is faithful not only through the good times but through the bad times. There will always be evil that causes bad things to happen. Why God allows them to affect our lives in one way or another is a mystery. But God will always create something good from that bad circumstance. Have faith and you too will begin to see the good.”

Nate stood and then realized that they had not followed the six-foot distance protocol but was thankful that the man had taken the time to sit with him. “Joe, thanks for your kind words. I need to get back on the road, but you have given me a lot to think about.”

“Son, I will be praying for you. Stay safe and I pray that God will grant you answers to your questions. I too need to get back to work and finish my sermon notes. We’re not meeting in the church at this time, but the younger members have rigged me up to live stream my sermon to our congregation. So, I better make sure it’s good. You too have given me some things to think about.”

Nate watched Joe walk towards the church and shook his head. What are the odds that the pastor of the church would sit next to him and talk about the pain he was experiencing? Grandma Jane would have called it a god thing.

As Nate made his way back to his car, an old song titled, Great is Thy Faithfulness, started to bubble up inside of him. Why he would think of the old hymn was a mystery to him, but humming the tune seemed to ease the pain. Maybe he will grab Grandma’s bible and start reading it and perhaps God will give him some answers to his questions.

There is no shadow of turning with Thee,

Thy compassions, they fail not,

As Thou hast been,

Thou forever will be.

All I have needed Thy hand hath provided,